About The Seacoast Learning Center

The Seacoast Learning Center, located in Rochester, NH, serves the greater seacoast area which includes parts of NH, MA, and ME. Founded by NH Scottish Rite Masons, our center’s application was approved in April of 2004 by the Supreme Council of Scottish Rite Masons, and become their 55th center. We are the second of two learning centers in NH, with the other operating in Nashua, NH. Humane Lodge #21, F&AM, provided a street level commercial space in its building at 29 Hanson Street. The Scottish Rite Valley of Portsmouth and Dover agreed to be the sponsoring Valley and provided the construction funding. The building has sufficient private tutoring rooms to teach up to 36 children each school year.

Our center opened it’s doors in October of 2004. Since then, more than 40 children each school year have received training to help them overcome their dyslexia. Many of our dyslexia practitioners have gone on to excel in the public school system and their post-secondary education. More than 350 students have been tutored through our center and 125 teachers and other professionals have trained and been certified as dyslexia practitioners in the Orton Gillingham clinical methods. Some continue to work at our center while others work in the public and private sectors. Children with dyslexia have benefited from our program no matter where our graduate tutors have gone.

About Our Center Director

Brenda Peters is the Director and Teacher Trainer at our facility. She has over ten years of hands on experience, in various capacities, working with children and adults with dyslexia. Prior to assuming the role of Director at the Seacoast LearningCenter in 2014, Mrs. Peters trained and worked at the Children’s Dyslexia Centers, Inc. Nashua, NH location. In addition to her thousands of hours teaching struggling youngsters with dyslexia how to cope with their disability, she also has a son with dyslexia. Her son’s struggles inspired her to enter the field to not only help him but to help others with dyslexia as well. She knows dyslexia both from a clinical perspective and from the heart-felt perspective of a parent with a child struggling with the disability. She worked as a consultant in resource productivity before embarking on her current career teaching and helping people afflicted with dyslexia. She holds certifications as a Reading and Writing Specialist, Learning Disabilities Specialist, and a Specialist in the Assessment of Intellectual Functioning. She is also a dyslexia diagnostician and consultant with Reading Solutions of NH.

What Students & Parents Are Saying

Millions of school children with dyslexia, also known as a specific learning disability, endure frustration and demoralizationon a daily basis as they struggle to acquire skills that many of us take for granted. If your child is struggling with reading and writing, how do you know if dyslexia is the cause? Where can you go for help? The Children’s Dyslexia Centers, Inc.

Since 1994, the Dyslexia Centers have tutored over 10,000 children who are afflicted with dyslexia at no cost and more than 3,500 school teachers and other individuals interested in becoming certified tutors have received training at no cost as well. We are pleased by what we have witnessed, both anecdotally and statistically. that shows our tutoring program is having a positive effect on the lives of dyslexic children, their families, and their communities.

For more than 20 years the Scottish Rite Masons, Northern Masonic Jurisdiction, have been national leaders in the effort to help children and their families overcome the obstacles of dyslexia. With over 40 Dyslexia Centers, in 13 states, we are tackling the challenges of dyslexia head-on through our free tutoring and training highly skilled and dedicated tutors.

At the Dyslexia Centers we have seen how early diagnosis and treatment enables children to overcome the obstacles of dyslexia, gaining both a confidence in their ability to achieve and a vision for their future success. Data on 213 children from 33 Dyslexia Centers in 11 states, illustrated in the following chart, shows that the children enrolled in our program are closing the gap between where their peers are and where they themselves were when they first entered the program.

During the 2013/2014 school year, 534 children just starting the Children’s Dyslexia Centers, Inc. program were given 4 standardized reading and spelling tests to track their progress. The children took the tests 3 times within a week of their first tutoring session and subsequently at the end of the 2013/2014 and 2014/2015 school years.

As the chart shows, when they entered the program the average score on all 4 tasks was in the below average range. By the end of the 2014 school year, and after about 50 tutoring sessions, their scores had begun to close the gap with thoseof their classmates. After an additional 50 sessions, at the end of the 2015 school year, their scores continued to close the gap.

After 2 years of participation in our program, consisting of approximately 100 tutoring sessions, the children’s test scores moved into the average range in reading nonsense words and reading comprehension. Their test scores in reading real words and spelling real words were in the borderline average range. Additional analysis of each of the individual children indicates that 100% of them improved their scores in at least one of the 4 tasks 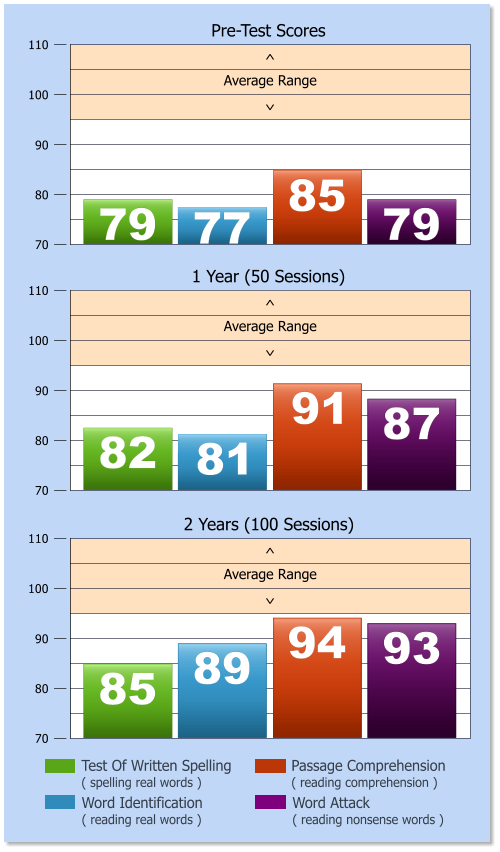 GET A DIAGNOSIS
APPLY TODAY

Thank you for contacting the Seacoast Learning Center. We'll get back to you as soon as we can!